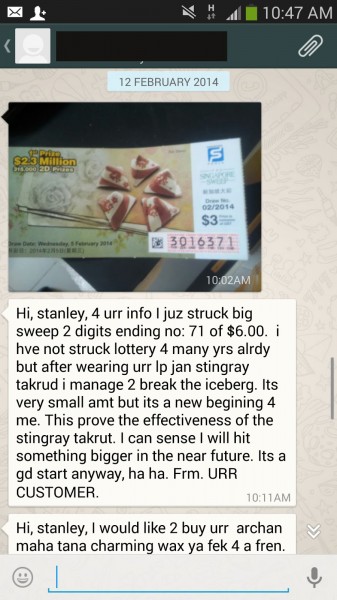 See peung cream Chang Khong wax â€“ non spirits( charm elephant wax) by Archan Em
The very first amulet which Archan Em had made during 9 years old was the powerful charming wax and that time were very effective among the user. In Thailand, Archan em was popular and well-known for his effective charming wax till this present year.

Ingredient : The oil was extracted from the temporal 2 side of 9 elephants. These 9 elephants were the header and alpha leader of the groups of elephant belonging to different 9 groups.

Almost any other master will only took oil from one elephant to made the wax as the process was hard but Archan Em had collected from a total of 9 elephants and those elephants were the leader of group so these wax Archan em was very confident that it will be very powerful.

Archan em said that when there is a specific time when collecting the oil, The master must learned the subject of controling the elephant (He learned from his grandfather ) how to control the crazy elephant been in rut and chant mantra to tame the crazy elephant. Before Archan em collects the oil from those 9 elephants, he had to chant the mantra before collecting the oil , if not the elephant will hurt and attack the master.

All Ingredient was mixed together including the cream wahn kalong, penis oil of 9 elephants, salika bird made from love wood, wahn saolong herbs, and many other old ingredients which he had kept for many years.
According to Archan em, this cream can be used for trap the lovers heart and attract the ex lover back to the person, and also make yourself popular.
It spellbound people after they saw you and make them listen to your wish

The see peung cream chang kong wax brings about successful love and romance in a relationship. It is an elixir of romance for binding new couples together as well as for existing love couples who needs an ultra strong boost in their love commitments. For existing couples, it can move past negativity and return passion to a relationship.

It will stop interference from friends and relatives and allow two people to love each other, stay connected and develop their unfolding relationship in peace. This cream ensures bad romances flee away as the past and deep in the underlying layers one can find the most precious love that is uplifting at the time when there is least of hope in love life.
In the path forward, it produces invisible power of love, bewitching and enchanting seductive magnetism, which draws romance into ones life. They correspond to the passionate progression of: smiling at the beloved, holding hands, gazing into each other’s eyes, embracing and kissing, and sexual union.

This cream can be used for
– Enhance Sales and attract profits
– Attract right people opportunity to you
– Charm ex lover back
– Attract the members of the opposite/ same sex
– Increase your popularity everywhere
– Well-liked by all including your most horrible boss
– Attract career advancement to go for higher position.

Way to use:
Apply on forehead, eyebrown and lips for best effect when charming others or toking persuasion

Before this cream is completely sold out for good,
Get this tub of Archan Em See peung cream Chang khong Wax at $148sgd